As Summer rolls on through, we put another hot week behind us and gear up for what looks like another hot one ahead of us. Forecasts call for isolated thunderstorms throughout the weekend so make sure you have your foul weather gear just in case! The bite this past week has picked up, especially in the typical areas such as Swan, Love and Podickory Points.

One housekeeping note before we get into the report…Our White Perch Open is NEXT SUNDAY! On August 19th, we are holding our 3rd annual White Perch Open tournament at Podickory Point Yacht Club. Everything you need to know about the event can be found here. Sign up soon!

The Chumming/Chunking bite has continued to shine over all other methods this past week. Especially in the areas of Pooles Island, Swan Point, Love Point and Podickory Point. We’re finding fish in 20′-25′ of water near channel ledges, earlier in the am or later in the evening. Fishing either FRESH Alewife, Soft or Peeler Crab on the bottom has been catching numbers recently. The size has come from Live-lining Spot in these same areas.

Another great place to Live-line right now is going to be at the Bay or Key Bridge pilings. Specifically the Eastern side of the Bay Bridge in 15′-20′ of water.

Don’t forget that you need to be using in-line circle hooks while fishing with Chum/Chunk or while Live-lining. Ideally a 6/0 or larger hook will be used to reduce the number of gut-hooked fish. If you’re catching throw-backs, we ask that you handle the fish as little as possible and try to leave the fish in the water while unhooking it. This will help with their stress levels and hopefully reduce the Rockfish mortality rate.

There are decent Rockfish being caught in 8′-15′ of water around submerged structure in many areas of the Upper Bay this week. Early morning topwater action gives way to a slow/decent jig or sub-surface jerk bait later in the day. Water temps dropped a little over the last two weeks but we’re seeing them start to climb back up due to sunny, hot conditions out there. Once the sun is up, look to find these fish in deeper water (15′-25′) with more dissolved oxygen for them to breath.

While the bite has been decent, the waterways still pose a threat to boaters due to submerged/floating debris from the Susquehanna/Conowingo Dam two weeks ago. We are urging anglers to fish with extreme caution and travel at slower speeds so you can keep an eye out for debris. If any is spotted, report it to the Resources Police or Maryland DNR.

If you are in the Mid-Lower Bay area, you will have better success trolling Surgical Hoses in Red or Green color or Gold Spoons on a size 1 or 2 planer. Be careful of debris as it is tangling up many spreads.

We’ve been asked no less than 958,000 times where the Spot and Croaker are over the past couple months. We finally have a somewhat decent report for Spot fans. In 10′-15′ of water around the Western side of the Bay Bridge there are Spot being caught on bottom rigs baited with Bloodworms. There have also been reports of Spot being caught off Romancoke Pier in the Eastern Bay.

The Croaker are still pretty far south and we don’t anticipate many moving up this way due to all the fresh-water flooding into the upper bay the past couple weeks. Reports are from the mouth of the Potomac up to the mouth of the Pautuxent in 10′-15′ of water on hard bottom. 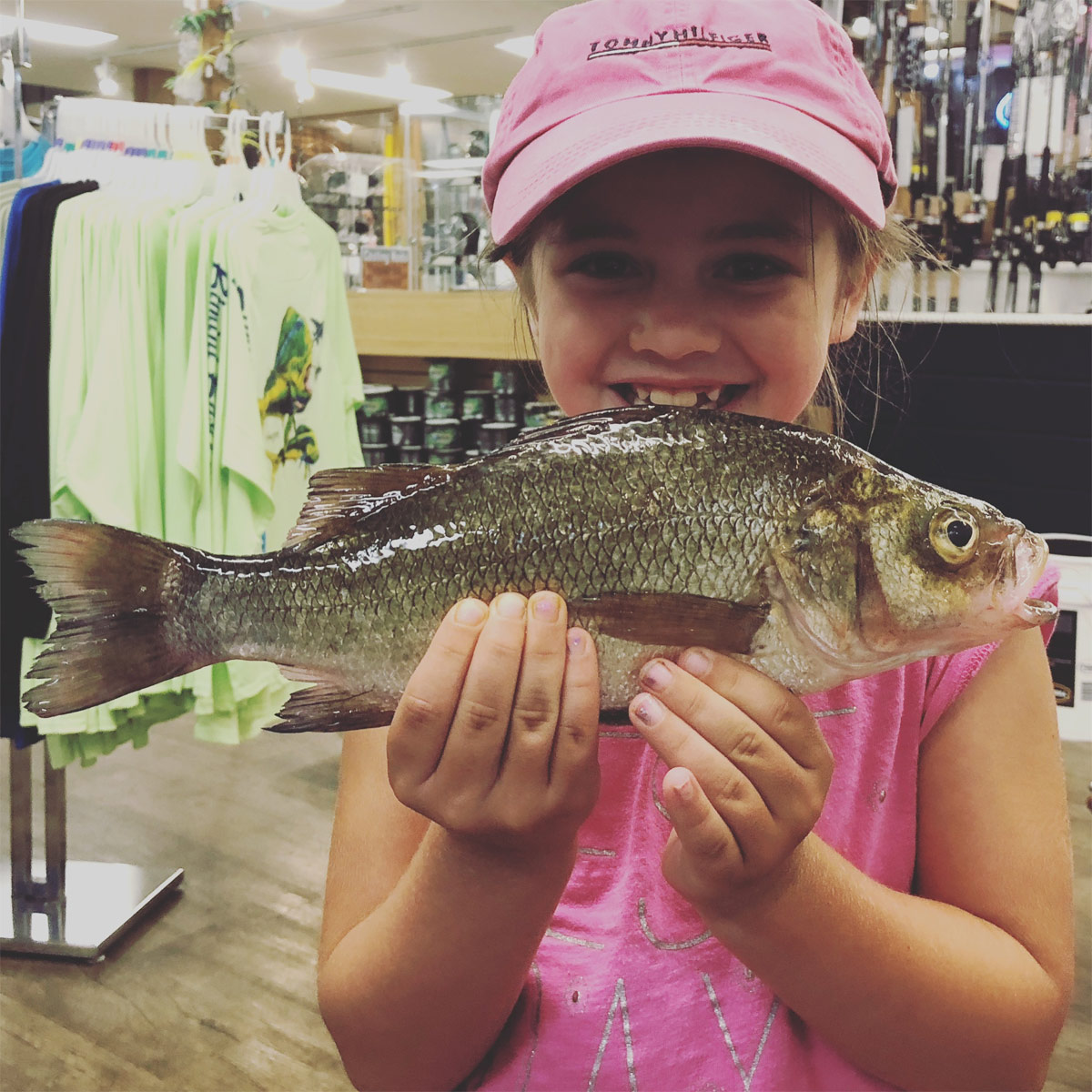 Abbigail got into a citation sized perch this week while fishing off her pier! She actually doubled up on two Perch at the same time! Way to go Abbigail!!

The Perch bite has been on fire the past week. Hard to believe with the water conditions the way they are but we’re seeing tons of fish being caught recently. Some anglers are reporting catches of over 60 fish in a single trip around Deale, MD. We are not only seeing numbers being caught but also some very nice sized Perch as well! Look to target them in deeper water with either Soft Crab, Bloodworms or Razor Clams on a bottom rig with 1oz weight. You can find them in the shallows in many of the area’s tidal rivers and creeks around Docks, Piers, Rip-Rap, Grassy Flats or Bulkheads. The ideal shallow bait is going to be a spinnerbait like a Bert’s Perch Pounder or a Super Roostertail.

Kent Horst shows his excitement as he adds another one to the cooler! Nice Perch Kent!

If you don’t know, the White Marlin Open is going on right now and ends this week! Some really exciting catches have been weighed in, including this 881lb Blue Marlin!

The tournament wraps up this weekend and we’re looking forward to finding out who will take home the big prize!

Fishing offshore has been on fire lately. Plenty of Dolphin, Tuna, Sea Bass, Flounder and a mix bag of Shark are being caught with regularity. Trolling and bottom fishing around the wrecks has been good and it seems as if you can do no wrong out there right now! 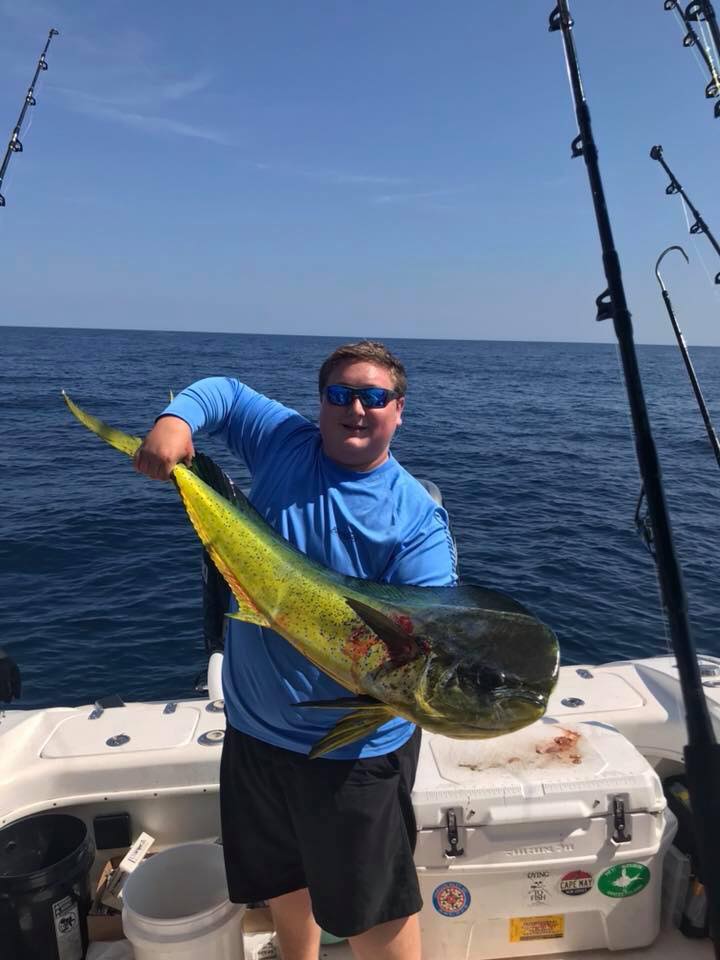 Pro-Staffer Mike Fiore has been hitching rides out to the deep blue lately and shows off a nice Mahi he caught this past week! Get to work Mike! 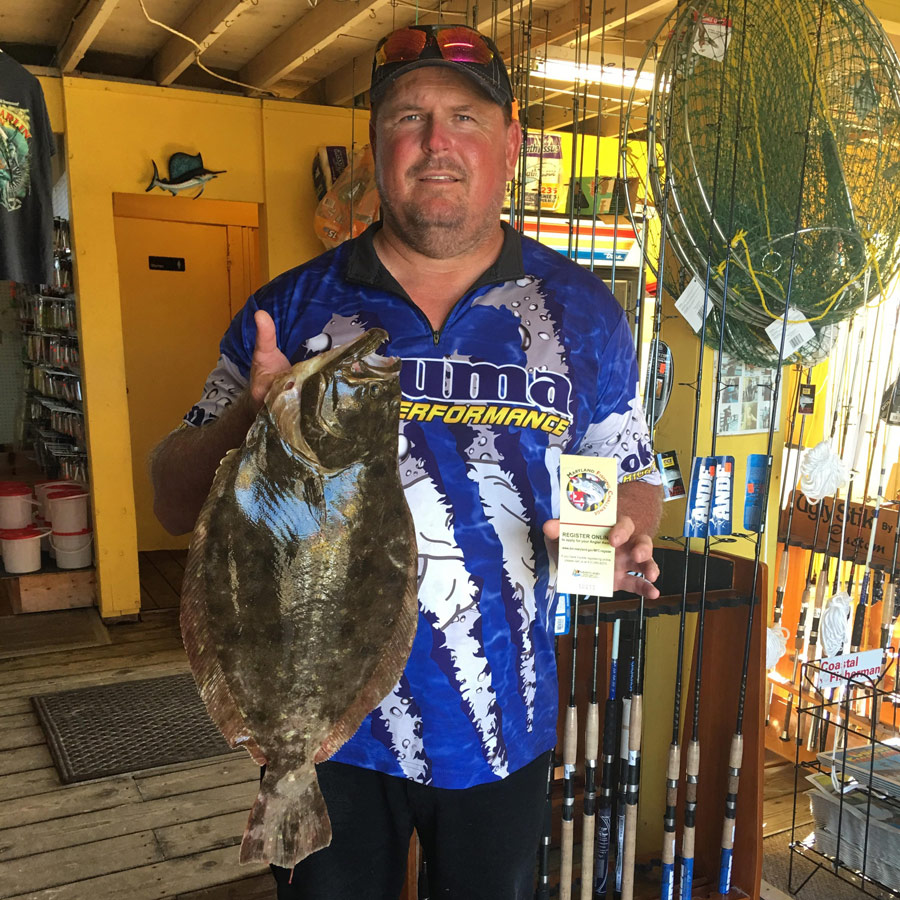 Todd Hornbaker landed this 6lb brute Flounder on a frozen shiner in OC this past week! Heck of a fish Todd!

Show us what you caught!

We’d love to see your catch! Send your photos with some simple info (your name, location, bait/technique) and any other info you’d like to share to kevin@anglersannapolis.com. By sending your images you are giving us permission to use them online.

If there are any children under 18 we need their parents permission before posting any images online!